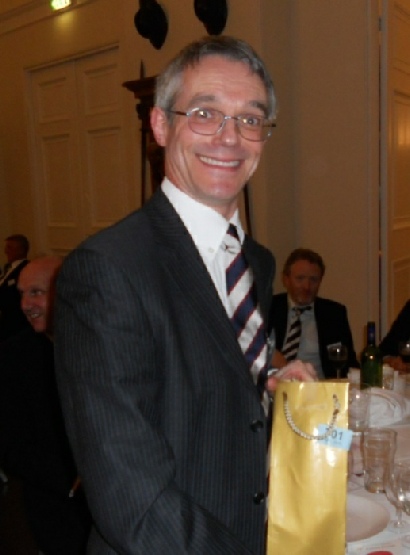 John caught nicking one of the raffle prizes at the

OFA Dinner, Farnham Castle, 2011, despite the precaution of having a look-out man attached to his left sleeve.

John is one half of the editorial team for Blunderbuss.

I've followed a career in medical librarianship, not sure why but it probably arose from spending a year's pre-Dip Lib training at Charing Cross Hospital Medical School Library in 1983. I've lived and worked in Birmingham (University of Aston 1984-85), Sheffield (Royal Hallamshire Hospital 1985-1995) and London (since 1996). From 1996-2016 I managed the information service for Great Ormond Street Hospital and the UCL Institute of Child Health. Following the major restructuring of UCL Library Services, I was made redundant  in the spring of 2016 and moved to a new post as Library Services Manager at the North Middlesex University Hospital NHS Trust. However in 2018 I decided on a further move to become part-time Parish Administrator at the historic Grade I listed St Cuthbert’s Church, Earl’s Court, whilst also continuing my research into Brookwood and West Norwood cemeteries.

From 2007-16 I worked part-time in London following the offer of becoming Historical Consultant to Brookwood Park Ltd, proprietors of Brookwood Cemetery. Brookwood Cemetery has been a long-standing interest of mine and I have several publications and papers in print on aspects of the history of the cemetery. I was based there two days a week dealing with historical enquiries from far and wide and conducting regular guided walks through the cemetery’s extensive 460 acres.

A recent article on the cemetery’s railway service appeared in the November 2012 issue of the Guildford Magazine. Unfortunately in November 2012 I lost my job at Brookwood due to a change of management. From July 2014-2016 I worked part-time as the Subject Support Assistant at the Joint Library of the UCL Institute of Ophthalmology and Moorfields Hospital. I resigned from this post in the spring of 2016 to take up my new duties at the North Middlesex Hospital (see above).

More information on my professional and cemetery activities can be found on my website.

My interest in Brookwood Cemetery stretches back to College days. This is one of the earliest photos of me at Brookwood which was published in the Woking News & Mail in 1979. Also in the picture is the more dapper Mark Wealthy who was also interested in the history of the cemetery. We are resting against the platform of South Station with the Church of England Chapel behind. This site is now privately owned by the St Edward Brotherhood, but that’s another story ... 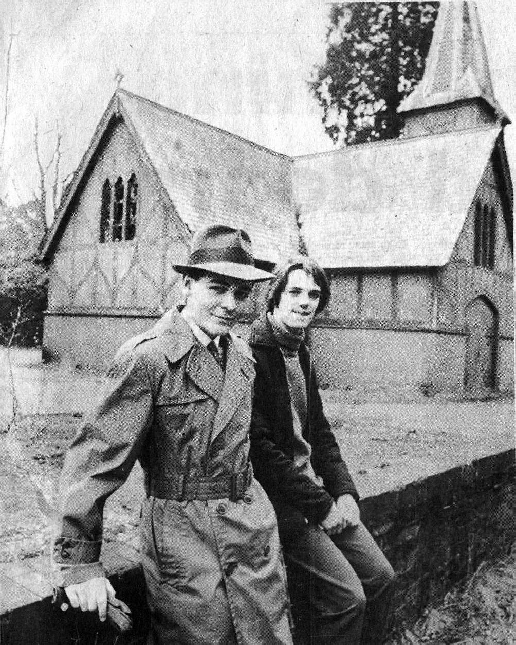