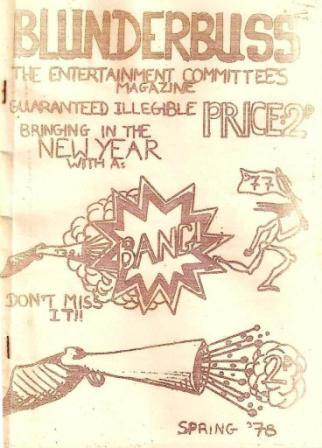 This page provides the full text of the seventh issue of BLUNDERBUSS.

It appeared in the Spring of 1978, and appears to be the last issue of the original BLUNDERBUSS.

You can read the full Blunderbuss archive here.

A Piece of Writing

Letters to the Committee

A Letter to the Ents Comm

A Piece of Writing

'Twas Brillig and the slithy toves did Gyre and gimble in the wabe all mimsy were the borrogroves and the moe wraths outgrabe. Beware the Jabberwock my son the jaws that bite. The claws that scratch, beware the jub jub bird and shun the furious baridesnatch. He took his vorbal blade in hand, long time the manksome foe he sought, so he rested by the tum-tum tree and stood awhile in thought and as in (can't read this word) thought he stood the jabberwock with eyes of flame...

Found on a desk by the door in room 7.

Letters to the Committee

I wish to complain on behalf of the male staff of Farnham College, that we are not allowed to wear women on the inside of our clothing ... Especially as it is such cold weather.

I would like to give sincere warning to fellow students. Many do not know that, as I have found to my amazement, navels are not for growing geraniums in.

I would like to thank you for not revealing that my goldfish wears a toupee.

Please could you help me? I am learning to eat live aardvarks and would like to know if this would have any adverse effects on my height.

Rather a dreary time. You will lose most of your friends and probably get beaten up a few times.

Not a bright week for you Taureans either. I predict serious bouts of your least favourite illness. You will also itch a lot and smell.

This star sign is said to be the sign of the crab, but the name has a much simpler and more unpleasant origin.

After early assassination attempts on your family, things will settle down towards the end of the week when a piano will fall on your head and kill you.

Not a happy time. On Thursday or Friday a tall dark stranger will visit you, rub skunk-juice in your hair and burn your telly.

Yes, things are really going to be rotten for you Librans. As you sit on your filthy homes, inter-continental ballistic missiles will bear down on you from the skies and blow you and your stinking hovels to smithereens!

I wouldn't be in your shows for anything! Norwegian terrorists will put plasticine up you rnose and giant ferrets are coming to eat you all u and drag your bone sinto a steaming pit.

This is just not your day! Simpley everything will go wrong! If I were you, I'd give up altogether. Oh yes, you're really in for a rough time!

If you think Sagittarius are unlucky, wait till you see what's in your dinner tomorrow! Bit of rat and peoples ....

As I walk the corridors of Farnham College, surrounded by henchmen and friends, people leap forward, pin me to the ground and breathe hotly into my face: "Never mind your damned Ents. Comm. darling, come away with me to Churt." Of course, I have to resist. Blunderbuss is the organ and mouthpiece (physically possible?) of the Ents. Comm. and as such is a vital part of the college.

I know the grinding tedium of college life can be too much. I know you feel depressed and neurotic and miserable. I know you want to lash out at the system. I know you can hardly bear the strain, and feel growing insecurity and encroaching paranoia. "Is it worth it?" you ask. Sometimes you could give up altogether and throw yourself into the Tuckshop. I know you feel like this. So do I, please help me. Make the job worthwhile. Use BLUNDEBUSS asa medium for artistic expression: fpr complaints or suggestions. If you want to say ANYTHING, tell us. We are for you to have your say. If you're not happy with the entertainments provided, don't just sit groaning; get up off your big fat chair and set pen to paper - We want to do what you want to do. Probably ... MOVE my children, LIFE IS WHAT YOU MAKE IT!

I lie there contented

my stomach is full

Suddenly I feel a movement

It is deep in my throat

(Written by an "A" level English student)

A Letter to the Ents. Comm.

Please be so good as the last one. Thanks to Arnie, geoff, Mike and Martin & co., the EC has a good name here. It set itself up, financed itself and has doen great things since it formed all those years ago. It has not destroyed, despite the dreaded council consitutionalism, so survive, flourish and be as good or you'll catch something nasty.

Love and kisses from Dapravo the Rat

Maggs (Chambers) who did the cover design ... also to Mrs Brown for fitting us into her busy timetable ... and to this bloke - who I don't know the name of - who wrote everything in here (except this).

PS: Also to the old committee - Arnie, Geoff, Julian, Louise, Martin and Mike for being such nice people.

My Fair Lady: A late review

Farnham College has not seen such a success since "Oh what a lovely war" which is not really fair as there have been some excellent productions in between. However, a musical always pays off and Jane Walters gave us a good production. It is a pity that more FC students couldn't get to see it but, in the tradition of the school, tickets for the student matinee went first to other schools and second to us lot. Not that we matter; we only keep the teachers here off social security.

To the production. Scenery was effective and scene changes were swift. The orchestra added to the general exuberance and their accompaniment was startlingly strong for such a small group of musicians. Even Sid Vicious would have stabbed himself in the arm in time with the songs. If Mr Hand's doo-wops detracted from the music, his conductory gesticulations certainly added to it.

The acting was of a high standard and, without running through the whole cast, one must say that there were some very nice performances. Geoff Whiting, as Doolittle, was miles better than Stanley Holloway in the film, and Alison Warren's superb performance would have made Audrey Hepburn crawl under a stone. James Mates played his normal MCP self well but I felt that, on Wednesday anyway, he was Higgins while speaking and out of character while awaiting his cues. Naughty James. Pickering was played extremely well by Jeremy Vernon who sustained his character throughout, a quality that I must admit was not present in all the characters.

There were two minor things which slightly spoiled the productions. Firstly, the positioning of the microphones meant that, in certain places downstage, the actors sounded as if they were talking with their heads in tin buckets. Secondly, a criticism of the actual play: Lerner, as opposed to the more enlightened Shaw, does not credit Eliza with much strength of character in his own improbable and male-chauvinist end.

Notwithstanding, it was an enjoyable production altogether so praise again to Jane Walters and her cast. Finally, good luck to Mr Trotter, who has to follow "My Fair Lady" with "The Comedy of Errors" at Easter.