We share here the obituary by Sally Russell (nee Pike), one of Jeremy’s contemporaries, that was published in the Farnham Herald. We also include Richard Hoyes’s memories that appeared alongside Sally’s piece in the Herald. 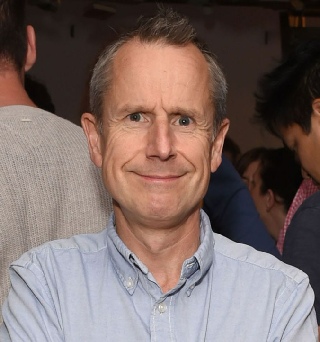 Jeremy Hardy’s passing at the age of 57 has generated a host of sincere and glowing tributes throughout the media, including those publications which would normally shun his political views. Many people, it seems, feel that they have lost a friend, an ally, a hilarious voice from the radio.

To those of us who knew him as a youngster, the news came as a huge shock. There was a collective sense of loss which affected many of us far more than we felt we had the right to. He was, quite simply, one of our own.

I first met Jeremy in 1973, when Farnham’s two grammar schools merged to become Farnham College. As the last intake to the grammar school system, our year was doomed to be the youngest of the new school until reaching the Lower Sixth, when it became the first sixth-form college in Surrey. Jeremy and I were in the same class, took English and History ‘A’ Levels together and afterwards both went to the University of Southampton.

The early 1970s were characterised by three-day weeks, miners’ strikes, power cuts and political upheaval. Clashes on picket lines, lay-offs, train cancellations and disruption to food supplies were in the news every day. Against this backdrop, the young Jeremy wrote a satirical sketch for our second-form drama class, a spoof game show based on the miners’ strike, complete with dancing girls and cheesy host. I can still sing the chorus. I always meant to ask him if he remembered it, an early demonstration of his ability to combine comedy and politics.

That period in the UK was also one limited to three television channels, a Golden Age of TV where everyone watched Morecambe and Wise, The Two Ronnies, Dad’s Army, et al. Our first morning lesson was often dominated by enthusiastic retellings of The Goodies’, Monty Python’s Flying Circus’ and Fawlty Towers’ episodes from the previous evening, especially by the boys in the class. It wasn’t unusual to find half of them dressed as “Gumbys” (from the Monty Python Gumby character), knotted handkerchief on head and trousers rolled up. Jeremy loved all this, quoting lines in perfect accents and with immaculate timing. It’s easy to trace his humour back to these surreal, absurdist roots. He didn’t need TV shows to make him funny, though. His comedy was entirely natural and spontaneous and usually ended up in a fit of giggles, along with the rest of the class.

Despite his claim of not being academic (which he was), Jeremy was a true historian, embracing the minutiae of detail with a shrewdness beyond his years. Our school held mock elections at the time of general elections and encouraged debate of all types, a perfect grounding for someone of his sharp intellect. His understanding of the subtleties of cause and effect gave him a world view which made him a formidable debating opponent.

It’s impossible to talk about Jeremy without acknowledging his political activities. Often controversial, his beliefs were firmly founded in a basic desire for social justice and a sense of humanity. As testified by many in recent days, he was true to his beliefs all his life, a rare commodity in these days of quick fixes and knee-jerk reaction politics.

As a person, Jeremy was kind, considerate, thoughtful and modest. There was no “side” to him, no change in persona due to fame. We’d meet him at college reunions or after his shows at The Maltings and just natter about the old days, schoolfriends and teachers. It’s this honesty and authenticity which touched millions and one of the reasons why his loss has been felt so keenly. Listening to old recordings of his has brought back happy memories of our school days in Farnham and it’s been heart-warming to realise how well-loved he was. I send his family and friends heartfelt condolences. 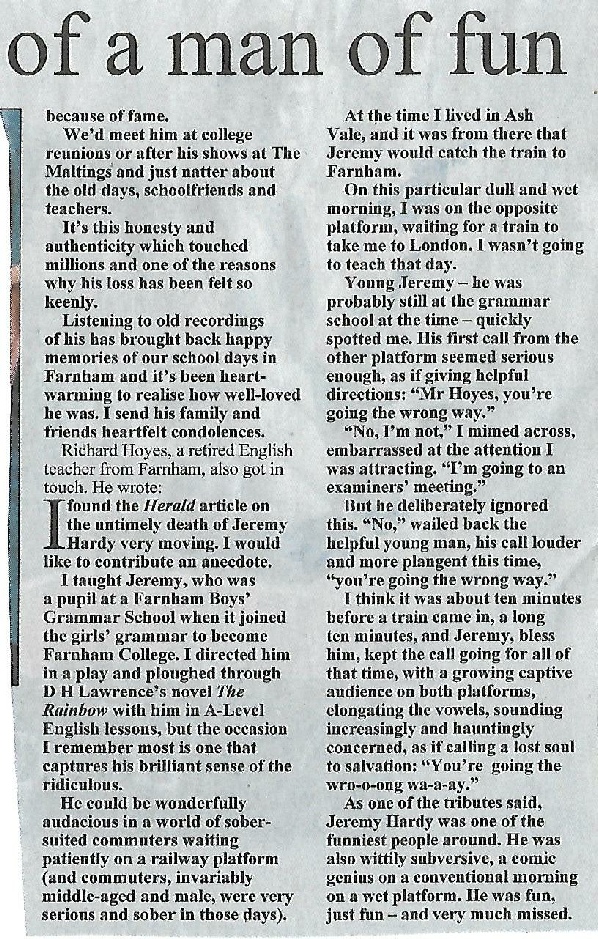