Peter Eric larby was born in 1927. With his twin sister, Freda, he spent his early years in the family cottage, near the Frensham Ponds Hotel. Later the family moved to Churt and he attended the village school. He successfully passed the  entrance examination to the Farnham Grammar School.

At Farnham Grammar School, besides his academic studies, Peter was a fine all round sportsman. On the games field he excelled in soccer, cricket and athletics. In fact he held the 110 yards hurdle record for many years and ran for the Surrey Grammar Schools.

Following his time in the 6th form, he gained a place at St Mark and St John's College in Chelsea. However before he could take up his place he was called up for National Service and had to put his further studies on hold. He spent 3 years in the RAF, two and a half of them in Ceylon, (now Sri Lanka), where amongst other things, he of course, continued his sporting interests. He was selected to represent the RAF in the Far East area.

It was here that he met up with Michael Jacobs, who later was Best Man at Peter and Pearls' wedding, which was held here at St Thomas on the Bourne. Michael remembers Peter as a chap who knew exactly what he wanted, he knew he was going to teach and that Pearl was the person he was going to marry.

After the forces, he took up his place at "Marjons" college, gaining his B.Sc degree and teaching qualifications. He then returned to Surrey and did indeed marry Pearl in 1950.

Peter's first appointment was to Dorking Grammar School in 1951, where he taught Mathematics, Physics, Chemistry and, of course Games. This meant moving to live at nearby Brockham. It was here that Robin and Susan were born. However, a few years later, he wanted to move back to Farnham because of his mother's illness.

It was then, at a chance meeting with his 'old' English master, that  Harold Beeken suggested that Peter might consider applying for a vacant mathematics position at FGS. Peter did, and he was appointed by George Baxter, to teach Mathematics and help with games. It is interesting to note that Donald Nicholson, also an old boy, was already on the staff of FGS. So in 1956, Peter and family returned to Farnham and moved to St Johns Road, where they lived for the next 37 years.

On a personal note, I will always remember Peter and Pearls' kindness and welcome to Farnham when I joined the staff of the Grammar School in 1964. This was indeed a great help and support for a young master settling in.

In the classroom Peter was a very effective and successful teacher, whether teaching Pythagoras to form two - or Calculus in the 6th form. Outside the classroom, on the games field, he soon became master in charge of the 1st XI soccer team that had much success over the years. He also played cricket for Farnham in the Park for many seasons. At school many enjoyable Thursday evenings were spent playing cricket for the Masters' XI. The opening batting partnership of Larby and Foster was formidable indeed.

When he stopped playing cricket, it was onto golf, bowls and then sketching and painting. However when he wasn't standing in front of a blackboard or on the games field he was never happier than in his garden – potting up, planting, weeding and mowing the lawn. Much time was spent in his beloved greenhouse.

Peter preferred and enjoyed teaching the whole age range from the first to the sixth form. So in 1973, not long after FGS became a 6th Form College, he moved to Eggars Grammar School as head of mathematics. He retired in 1990. Retirement saw him spending even more time in his garden — Peter and Pearl now having moved to Vicarage Hill. When he was not gardening he would often wander off on a walk — sometimes, I understand more than 20 miles. In winter, on a Saturday, he was often to be found with Susan watching the Saints play football at the Dell in Southampton.

Peter was a man of many talents and interests. He led a very full and rewarding life. Kind and generous, he was a quiet gentleman. He will be remembered with genuine affection by us all. 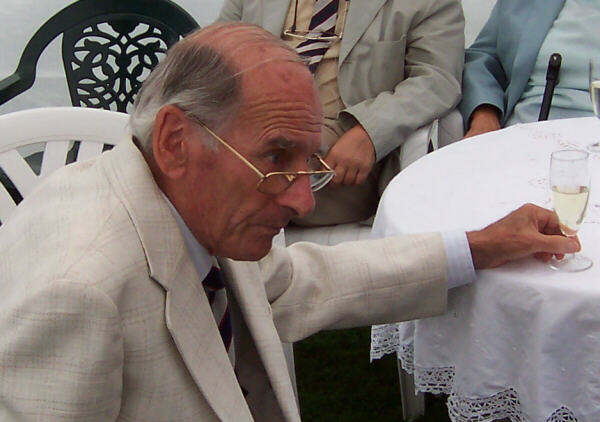