The Reunion: Together Again, the Class of '76

The Farnham Herald reported on our Reunion in its edition of 15 December 2000: 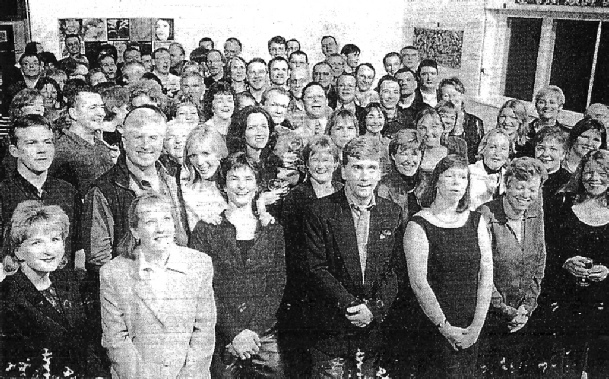 "After 8 months of preparation a reunion of around 100 former pupils from the Farnham Grammar School "O" level class of 1976 and staff was held at the Farnham College old assembly hall on November 11.

"For many it was the first time they had met in more than 20 years. While many attending the reunion still live locally, some had travelled from as fas away as the States, Australia and Holland.

"Networking was used to track down most of the ex-pupils while a private detective was employed to find those that had disappeared without trace. Mike Mehta explained: "Once the initial invitation had gone out, the whole event developed its own momentum. The class photo published in The Herald helped considerably as parents of former pupils still living in the area forwarded a copy of the article to their sons and daughters. In this way the word was spread far and wide.

"John McLaughlin, former deputy headmaster, was asked to draw the first lucky ticket and prizes of champagne and a barrel of biscuits went to old boys Chris Kenny and John Saunders.

"It was an opportunity for people to greet old friends and wallow in nostalgia. The back to the 70s mood was recreated using some authentic photographs of ex-pupils with shocking hairstyles and outrageously flared trousers.

"The Kei Bri disco provided the sounds of the 70s and ex-pupils grooved to T-Rex, Donna Summer and hits from Grease. For several hours ex-pupils were transported back in time to 1976.

"In entering the spirit of the event various members of staff and ex-pupils appeared to be wearing the same clothes as they were last seen wearing in 1976.

"Towards the end of the evening Mike Mehta thanked the college for providing the venue and Kevin Pollard, the estate manager, for his help.

"On leaving, pupils and staff were each given a millennium reunion year book compiled from potted histories sent in by ex-pupils together with their best and worst memories of life at the school.