This extract from Nigel Temple’s authoritative survey Farnham Buildings and People (Herald Press, 1963; 2nd edition Phillimore, 1973) gives a history of the former Grammar School premises on West Street. At the time of publication, the site was occupied by the Farnham School of Art.

This extract is also of interest as it refers to the “bracketed oak beam” from the “old school” which was subsequently moved to Morley Road and is now located at the bottom of the main staircase in the old building. 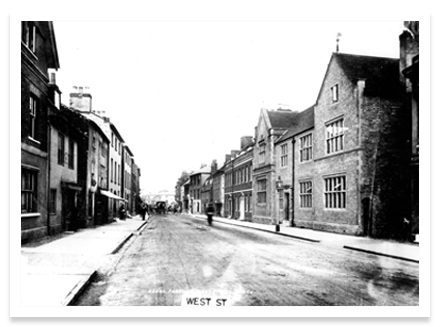 A building of two main floors and four bays, fronted grey brick and roof tiled. Bays one and four project, have gables facing north, string courses between windows, and flush stone coigns. Windows are transomed and mullioned in stone.

The school is of two main builds - the east bay 1872. The remainder (of this front block) was rebuilt c1895 to the design of Paxton Watson. Extensive alterations to this building and additions to the rear have been made since 1950.

Before the late 19th century alterations, there was, where bays two to four now stand, a house with facade of late Georgian character (see illustration below). It appeared to be timber framed, at some time jettied over the street. As a result of the refronting, it had three 1-3-1 sashes in flush boxes on the ground floor, pilastered and pedimented doorcase, a tiled roof and sashed dormer windows. The front was stuc­coed, and the house as a whole was more compatible with its neighbours than is the building which has replaced it. 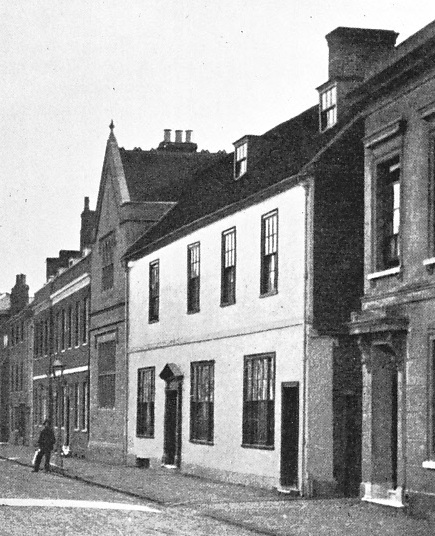 25 West Street. The Master’s House, Farnham Grammar School, before part-demolition and reconstruction. These buildings are now part of Farnham School of Art. (See also drawing below)

The Art School once served as Farnham Grammar School and later as Farnham Girls’ Grammar School. For the sake of compactness, the background history of 20-25 West Street inclusive is dealt with under this head, as until 150 years or so ago they were in single ownership. The block was sold to John Watts, carpenter, by Samuel Thompson, haber­dasher, and others of his family in 1716. Watts died about 1752 and left to his son John and Elizabeth his wife two houses then in his own possession and Thomas Baker’s, the houses being the eastern ones of those he bought from Thompson. Another six houses adjoining he left to William Watts. John Watts senior was father-in-law to Andrew Merriott who lived at number 26. By 1754 Watts’ property here included one acre of hops tenanted by Benja­min Stevens. It was bounded on the east by the hops of Westbrooke (Thomas Westbrooke was at The Wheatsheaf) and the rivulet on the south, the ground of John Wigmore being on its west. Wigmore was in the Church and in 1768 the Parish paid a John Watts £3 11s. 9d. for timber to repair bridges in its care.

It appears that in 1769 the eastern tenements included a bakehouse, as well as a hop kiln and sawhouse and that they were occupied by Peter Edwards, a baker, who entered contract with Richard Watts of Winchester, peruke maker, who had inherited part of the estate. 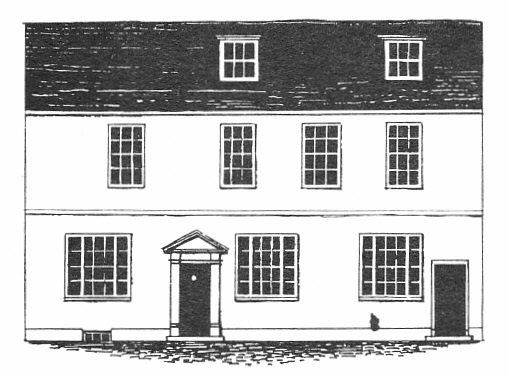 25 West Street, Farnham Grammar School. A partly conjectural reconstruction of the Master’s House which stood before the west part was rebuilt late in the 19th century. (See also photograph above)

The early 19th century saw some complex transactions mainly between Samuel Locke, DD., Walter Waller and Daniel Batchelour. Locke was once master of the Grammar School, and what is part of the Art School is probably what is referred to in a description of property written in 1809, when Batchelour conveyed to Locke “all that parcel of land then added to and made part of the garden in possession of Samuel Locke together with the farmyard belonging and adjoining”. On this land a hop kiln, stables, coach house, store­rooms, cowhouse and granary had then recently been erected; probably part remains in the buildings in Penfold’s Yard, now part of the Art School pottery. Later, ten acres of land were in Dr. Locke’s possession, including Whitmore at Frensham.

A guide to the time of earlier building at 25 West Street is to be found on a bracketed oak beam built into the new Grammar School in Morley Road. It came from the old school, and bears the date 1607. Some account of what is known of the school’s history is in the Victoria County History. It may, however, be added here facts which have recently been found.

A petition of 1682, recently printed by the Surrey County Council, includes informative details. Local inhabi­tants being clearly not satisfied with the running of this institution under Edmund Parker, “who for many years past hath bin master of the schoole hath by his frequent absenting himselfe from the schools and neglecting the schollers rendered the said Charity almost frutless few or none coming to the schoole frome abroad and the inhabitants to well knowing his Negligence and frequent absenting himselfe and how little proficiency Children have made under him and with all his continuall Imprudent Deportment therein hath beene Necessitated to there Great Inconvenience and Cost to send theire Children to other schooles whereas if an Industrious man were made schoolmaster it would Incourage strangers to send there Children to the schoole and the In­habitants besides the conveniency of having there Children well taught at home would reape other great advantages by promoting the trade of the place”.

Forty-two years later, when Dr. Willis made his visita­tion, things had not looked up much despite the petition. “The school is very low in its reputation and though there are only six boys required to be taught gratis I cannot find that there is now that number now in the school”. George Parker was by then Master. Like father, like son?

At that time the school was still attached to St. Andrew’s Church and endowed by Bishop Morley’s house in West Street, with three tenements and a garden, worth £20 a year.

Morley’s house too was in a bad state, Willis noting that although capable of accommodating thirty boarders it would cost £100 to put right. That was in 1724-25. The filled-in arch to the right of the church porch is where the school formerly stood. The building previously here was not, as the stones suggest, an abutment running south-north, but it ran parallel to the nave’s main axis. In height it was about as the nave, with a simple single-ridged roof, five stepped- buttresses along its north wall, a lancet window between each pair. In the east wall, high up, were two more windows which overlooked the porch. It seems as though this building was sold and the money put towards patching up the bishop’s house in West Street, thereby transferring the establishment to 25 West Street, for in 1758 the materials of the building were sold to Edward Beaver for £42. But even then the place floundered for another hundred years. Under Dr. Locke it seems to have done no better. He had brought with him the sons of twelve gentlemen and would not teach others. He left in 1822. Of that year is an indenture of two parts for a West Street property, including a farmyard, between him and John Augustus Brooke of Bloomsbury. Elizabeth Hooper (born 1801), governess, and some girl pupils, were hereabout twenty years later. In 1849, however, the Gram­mar School was reorganised, perhaps under the guidance of Richard Sankey (born 1803), vicar, who probably lived here at about that time, then under the Strouds the school prospered, having about 75 scholars at 36 guineas around 1870. 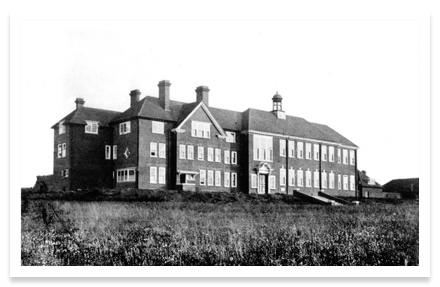 The Grammar School moved to its present building in 1906. It was constructed by Crosby and Co. at a cost of £13,000 excluding fields. Its roll by then was 110 day boys and 25 boarders. The Girls’ Grammar School, which is said to have had its origins in Mrs. Swayne’s school, was established by the Rev. T. Gardiner in 1903, then moved to 25 West Street which it left on the opening of its new building in Menin Way in 1939. Farnham School of Art, previously at 17 South Street, has since occupied the West Street building. At the time of writing [1963], Farnham Grammar School had begun its first major expansion since 1906.