Following the summer holidays we returned as 2nd Years on 12 September 1972. Amongst the delights of this year was our introduction to German, taught by Donald Nicolson.

September 1972 also witnessed the final intake to Farnham Grammar School. For the record, here is a complete list of those “captured”, taken from the December 1972 issue of the Farnhamian:

And one Francis Arnstein!

During this year the school photograph was taken. This may be viewed via the OFA website. The photo includes all years and all staff (including Mr Dyer, the caretaker). Click on the thumbnail above to enlarge the photograph.

The last Speech Day and Presentation of Prizes took place on the afternoon of Wednesday 15 November 1972 in the school hall. Below we reproduce the front cover of the programme. 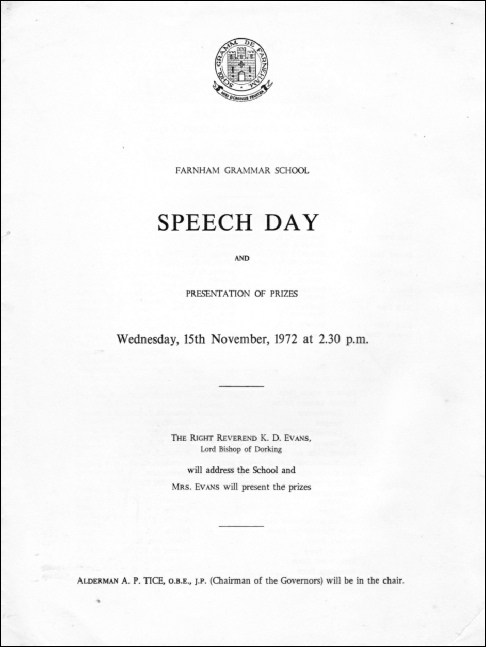 The second term began on 9 January and lasted until 13 April 1973. This was followed by the Summer term which began on 1 May and ended on 20 July 1973 (all term dates on this website have been confirmed and verified by David Bathurst).

With summer came the end of year exams. According to surviving reports the following are the average marks from Form 2C: