Nick now lives in Bristol and has his own company, Building Dynamics, which specialises in high quality building surveying advice.

In sending us some material for Blunderbuss, Nick also sent some further comments about his role in the Farnham 400 festivities:

“Attached is the scanned image; thanks for sending it: it really brought back memories. I remember Kathy’s and my visit to the bank, which I believe was in Guildford, although I can’t recall much detail of the event – probably curly sandwiches and warm orange squash.

“Along with a number of others, I spent Wednesday afternoons for a couple of years working with the Country Park Rangers at Frensham Common, working on land management, including maintaining and repairing footpaths and fences. There were two principal Rangers: Stuart (Dakers?), who lived by the cricket club in Farnham Park and a colleague, whose name was, I think, Craig. Stuart was the senior and was primary in the tree-planting. There is a columnist for The Guardian by this name – he looks like the Stuart I knew but I’m not sure it is him; you may want to email him to see if it indeed the same man.

“Wednesday afternoons were ‘free’ time, and this conservation work was instead of traditional sports: it got boring being the second-last to be picked week-in-week-out (I know who was last but will save his honour by not naming him; I didn’t even win last place) and this was time out of college with a chance to drive a Landover off road now and then. Of course, it was worthy too and hopefully made a difference in a small way to the ecologically important Frensham Common.”

[We have added a separate page with information on Nick's award towards the College Copse in Farnham Park which remains as a permanent reminder of the 400 celebrations.]

The presentation of the cheque at NatWest, Guildford. Left to right:

For the full story, visit the page on the College Copse 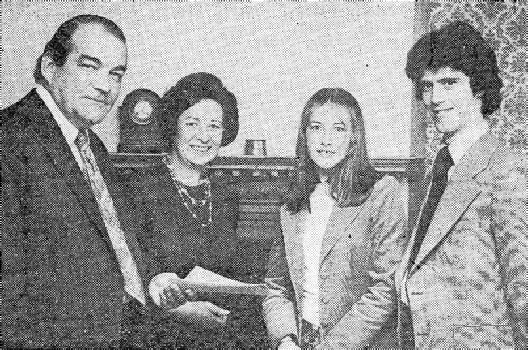