Thanks to Nick Blackman for providing further information about this plan which formed part of the "Farnham 400" celebrations in 1978. The tree planting scheme provided a permanent commemoration of the event. The initial plan to commemorate 400 years of secondary education in Farnham was published in the Farnham Herald on 3 March 1978:

"The planting of a College Copse in Farnham Park later this year is planned by Farnham College as part of their celebrations to commemorate 400 years of continuous secondary education in Farnham.

"The planting will be carried out by students, who are inviting sponsors to back the scheme by donating the cost of the trees. The copse - there may be two, if donors are generous, and funds allow - will probably be of mixed beech and oak. It has been suggested that 400 trees would be an appropriate number.

"A weekend of quarter-centenary [sic] celebrations is to be held at the college in May, beginning with a reception and Elizabethan-style supper with Farnham MP Mr Maurice Macmillan as principal guest, and including a fete, barn dance and barbecue. The intention is to mark the continuity of secondary education from the Grammar School in 1578 through to Farnham sixth form college, which is the latest educational institution to develop from the original Foundation.

"It is also hoped to raise funds for the college which, like other schools, is feeling the effects of the cut-backs in the county's spending on education.

"The idea that tree planting would be an ideal permanent commemoration of the anniversary came from Mrs Yvonne Gowers, community service officer at the college. "This, after all, will be something for the future," she said; students could come back and visit the College Copse in years to come and remember that they had helped plant it.

"Waverley's countryside officer, Mr Edward Holdaway, with the arboricultural officer, Mr D Coupe and Mr Craig Vincer - warden of Frensham Countryside park - where college students have been working - have visited the college to discuss the scheme.

"Mr Holdaway told the Herald that two areas in the more rural part of Farnham Park used for grazing had been set aside for tree plantations by the old Farnham urban council.

"This seems to be an excellent idea and a jolly nice way of commemorating such an anniversary," Mr Holdaway said. Although the scheme had yet to be put before the council, such offers were normally accepted with gratitude, and this was very much in accord with ideas about the Park.

"One of the purposes of the college in planting the copse is to help replace old and diseased trees - a considerable number of elms have been felled recently - and to minimise the effect of recent urban development. The project is being entered in a competition for schools called "Project Respond" sponsored by the National Westminster Bank.

"The group of students who provide a working party at Frensham as part of their community service will be chiefly concerned with the planting and after-care, but it is hoped that other students will also help with the planting on Saturdays. Everyone at the college is invited to take sponsor forms and enlist the financial support of as many donors as possible.

"Meanwhile committees and sub-committees are meeting regularly to plan the 400 celebrations, which begin when a BBC broadcast team visits the college on May 12th to record a session of their popular "Any Questions" programme. The panel has yet to be announced.

"The College is producing a special magazine to mark the anniversary and have invited local business houses to submit advertisements. They hope to sell over 2,000 copies. The 40 tutor groups will each have a stall at the fete on Saturday May 20th, and the Old Farnhamians are also closely involved. A grand draw is being organised, for which 20,000 tickets are being printed.

"Local first and middle schools have been informed of a children's competition for historical costumes, and the attractions will also include a hot air balloon and the Reading piped band. There will be a barbecue and barn dance in the evening, and a students' disco on the following Monday. On Sunday, the college will participate in evensong at St Andrew's parish church as part of the commemoration.

"In the hope the weekend will provide something for everyone, starting on the Friday evening with the formal reception and Elizabethan supper. Mrs Janice Rees, head of home economics, and her 'O' and 'A' level students - 26 in all - are planning and preparing the meal with the help of Mrs Cameron, cook supervisor, and her kitchen staff."

This was followed by the Farnham Herald reported on the award of £250 towards this project on 21 April 1978:

"A Farnham College plan to commemorate the quarter-centenary [sic] of secondary education in Farnham this year by planting 400 trees in Farnham Park has won a top award of £250 in the National Westminster Bank's £150,000 "Project Respond" schem for schools. The cheque was presented at the Guildford area office on Wednesday.

"Mrs Yvonne Gowers, head of community service at the college who originated the tree planting idea, told the Herald this week "we are absolutely over the moon", and from the Natwest office we were told "the judges felt this was a particularly good scheme, involving something permanent for the future.

"Two of the students who have been carrying out conservation work in the Frensham country park, Nick Blackman and Catherine Ballard, went with Mrs Gowers to receive the cheque from Mr Michael Wood, area manager.

"College students and staff have been recruiting sponsors to pay for the trees - oak and beech saplings hopefully to be planted in two copses, each of 200 trees, at a cost of between £900 and £1,000. Of the 240 sponsor forms that have gone out, the 20 so far returend have brought in about £200. "The idea has really caught on," Mrs Gowers said.

"Contributions have come from as far afield as Santiago, Switzerland and Bahrain - and from a Japanese student, with an accompanying letter in Japanese.

"The intention of "Project Respond" is that the award money should go to further the winning scheme. "There should be enough money to provide a really good quality fence round the trees - very necessary because of the cattle in the Park - and a commemorative plaque; any balance could go towards providing one or two nice benches," Mrs Gowers said.

"The tree planting will be carried out in the autumn by students working under the direction of Waverley's countryside officer, Mr Edward Holdaway, and the warden of the Frensham country park. Those chiefly involved will be the members of the College's conservation group and the community service "task force" - the two groups who backed Mrs Gowers in getting the scheme off the ground.

"The "task force" consists of 50 or 60 students who give up weekends and evenings to out-of-College hours and emergency community service. Their work was listed in the data submitted for the award.

"The trees will be planted on Saturdays, and students due to leave college at the end of the summer term will be coming back to lend a hand. The College will also provide after-care."

The link to Waverley Borough Council's leaflet on Farnham Park includes a map showing the location of the College Copse. 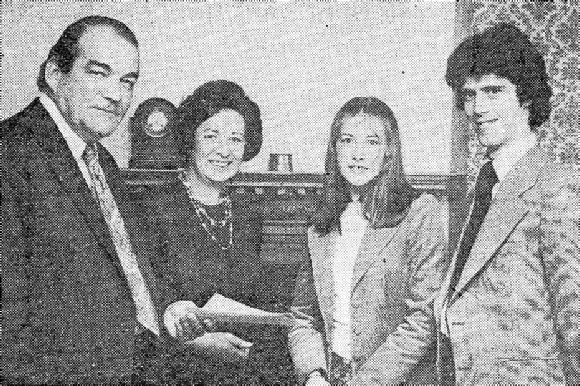