This pages summarises football notes from the pages of the Farnhamian. Please contact us if you can add any further information - especially photos.

This report is reproduced from the July 1972 issue of the Farnhamian.

This was a reasonably good season for the under 14’s.

They started off the season with a fine win over St. Michael’s 11-0, and in the return match won 8-1. Their other win was over Eggars G. S. Alton 4-1. The under 14’s only loss was in a very tight match against Weydon, when they went down 3-1.

This Colts team must undoubtably [sic] be one of the most unsuccessful Colts sides in the history of the school. However, there are several excuses for our bad results. This was a period of change for the team, and the side was nearly always different from one week to the next. Players of earlier years were unavailable, so new blood was integrated into the team, making the rhythm of the side difficult to find.

The form of the team was, however, largely as bad as the impression one would get from reading the scores. Overall, these results were deserved, but there were times when luck seemed to be completely against the team and the result could have been more favourable.

A record of Won 6, Drawn 1, lost 17 does not, of course, suggest a particularly successful season 1971/72. Indeed it was not, yet neither does it give an entirely accurate impression of the state of our game.

Our first win came after a number of quite heavy defeats and one wondered if, by beating Salesian Farnborough, we had turned the corner as direct and authorative [sic] football was played. But it was not to be.

Despite continuing to play football of good standard, wretched luck and a number of inexplicable defensive errors combined to leave us on the losing side in 7 of our next 8 matches, the monotony being broken by an efficient victory over George Abbot School.

The new team found us still in the doldrums, deservedly losing a further five matches until we came to the last quarter of the season when in the return fixture with Old College R.M.A. Sandhurst our opponents were very weary and relieved winners by the odd goal. The 1st XI continued in this rousing vein by winning 3 of the last 4 games, completing double victories over George Abbot and Salesian Farnborough in the process.

A strong nucleus remains for next season and we look forward to many successful games.

This following report is reproduced from the December 1972 issue of the Farnhamian. 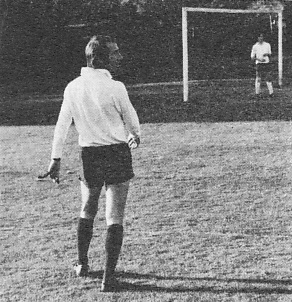 The House Football League was won by Harding, who gained 5 out of a possible 6 points. Childe and Morley shared second place with 3 points and Massingberde came fourth with 1 point.

Morley were unfortunate to draw with Massingberde but can blame themselves rather than anyone else. Harding deserved their draw with Morley even though it was gained in a rather lucky way; Childe should have taken a point from Harding but never showed enough finishing power. Thus the league finished in a predictable form:-

This report is reproduced from the December 1971 issue of the Farnhamian.

For the second year running, Childe won both the senior and junior league Football Cups. They slightly bettered last season’s performance, winning all their games. Harding were in the unfortunate position of having lost all their games, though they lost narrowly in all their senior matches and can look forward to the Knock-out Cup. In general the Junior matches were more entertaining with 34 goals scored in 6 matches. The seniors could only manage 23. Childe senior team only scored 6 goals, compared with 13 from the Juniors. The standard of football was good, and the 6th form referees must be applauded for their fortitude in braving the weather, which in some matches was very gloomy. There was a good turnout from the rest of the school as spectators, in both competitions. Whiting of the Childe Junior team was top goalscorer of the Juniors with 7 goals, and the Seniors distributed what goals they did score evenly amongst them. The Morley and Massingberd teams provided good opposition and missed winning the league only by losing to Childe in both cases. All teams can look hopefully forward to the knock out, but Childe will especially want to take all 4 cups for the second year running.

This report is reproduced from the July 1973 issue of the Farnhamian.

The 1st XI met with varied success in their first season in the Surrey Senior League. Playing against some of the best teams in Surrey, F.G.S. gained a notable win over Woking, who eventually finished second in the league. This was probably the best performance of the season apart from a fine 9—1 win over Eggars. The defence settled down in the latter half of the season to give some solid performances, and Carter and Ross played consistently well. Mallows was top scorer with 12 goals, followed by Heath with 4, and Carmichael with 4. A strong nucleus of players will remain for next season and, with the added influx of new players, the 1st XI should meet with greater success next season.

The Colts had a fairly successful season, winning ten out of their fifteen matches. After a bad defeat in the first match, the team was reshuffled, with the addition of Spence and Fitch to the forward line; and the team won their next five matches in a row, including a good 5-3 away victory at Farnborough. Castle was top scorer with 21 goals, and Fitch next with 14. Both Peters and Pearson represented the Guildford district football team, and the team was well captained by Saunders, with Groves acting as vice-captain.

The Under 13 Soccer XI got off to a good start for the 72-73 season by beating Collingwood School by the convincing margin of 14—0. Other highlights of the successful season before Christmas were a 17—0 victory over King Edward’s, and a 15—0 victory over St. Michael’s.

After Christmas, the Under 13 team were narrowly beaten only twice: once by Park Barn (1—2) and once by Woking Grammar School (3—5). However, these were compensated for by a good 5—0 victory over Eggar’s Grammar School - the best win in the second half of the season.

At the end of the season, the record was as follows:

The 1st XI has had mixed fortunes so far this season

and Westminster Bank being the highlights.

A fter an erratic start to the season when defensive

errors and missed chances caused the team to lose

matches they should have won, the team settled down

This term injuries have caused an unsettled team, and

therefore expectations have not been reached.

During the season P. Barnes and K. Robins have

This report is reproduced from the 1974 issue of the Farnhamian.

The 1st XI has had mixed fortunes so far this season with wins over R.M.A. Sandhurst, Dorking Grammar, and Westminster Bank being the highlights. After an erratic start to the season when defensive errors and missed chances caused the team to lose matches they should have won, the team settled down and went five matches without defeat before Christmas. This term injuries have caused an unsettled team, and therefore expectations have not been reached.

During the season P. Barnes and K. Robins have represented Surrey.

The 2nd XI has had a dismal season only winning against Ottershaw, when F.G.S. old boy Mark Toynbee did well to keep the score down to 5—1. The unsettled nature of the side has resulted in a lack of consistency with the best result of the season being a 3—3 draw against.

This report is reproduced from the 1975 issue of the Farnhamian.

found themselves unable to raise their game against stronger sides.