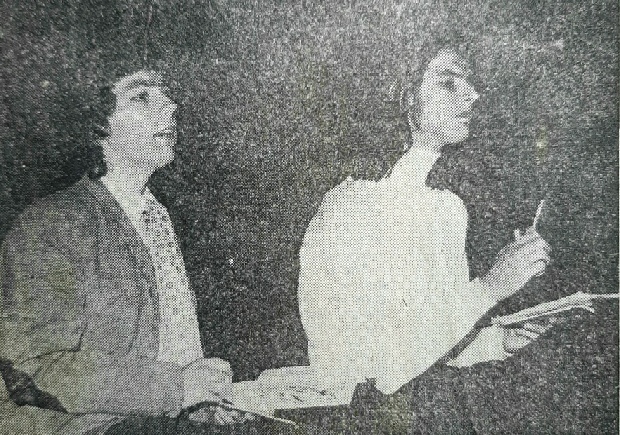 Simon Trimarco (left) as Birdboot, and Alan Watson as Moon in the Farnham College  leavers’ production of Tom Stoppard’s “The Real Inspector Hound”.

The College production of  Tom Stoppard’s “The Real Inspector Hound” was performed at the end of the summer term 1977.

We currently have no programme notes for this production.

The following is a review of the play (which was a double-bill with Us and Them), which appeared in issue 4 of Blunderbuss.

"Us and Them" & "The Real Inspector Hound"

“A satirical double bill from the Drama Dept. constitutes their apres examen production, tinged with sadness at the realisation that the wealth of UVI talent is leaving, but also with hope at the wealth of V Year Talent which is here for another two years.

The Real Inspector Hound, as the name suggests, is partly a Who-dun-it. It is also about the cultural snobbery of a certain type of theatre critics who write more for himself than the public (Maybe yours truly?) Alan Watson depicts the pseudo intellectual admirably.

The play within a play manages to stay on the tightrope between parody and caricature. John Swaine presents an uncanny likeness to Peter Sellars, but there is no connection in the characters. Being performed in the round heightens the fantastical effect, and leaves the watcher in confusion as to what is real and what is fantasy.

Anyway - both plays are well worth seeing especially for only 20p. If you missed it it is your loss. Don't miss the next production.”

Whilst the Farnham Herald published the following review:

“A  double bill of plays by Tom Stoppard and David Compton is being presented as a leavers’ production by drama students at Farnham College this week. Opening last evening, the plays will be given a second public performance tonight at 7.30. They will also be part of the programme for the College open day tomorrow.

The plays are “Us and Them” by David Compton and “The Real Inspector Hound” by Tom Stoppard. Becayuse of exam commitments therre has only been time for three weeks of full rehearsals, and head of drama Jane Walters, who directs, told the Herald the 20 or so students involved had worked extremely hard.

The plays are wordy and challenging, and for the first time at the college, performance is in the round. There is a minimum of scenery and costume, the more so as “Us and Them” is in workshop style.

The students taking part have been an examination group, and some hope to go on to work in drama. Two members of the cast of “Inspector Hound”, John Swayne and Simon Trimarco, have been chosen for the Surrey Youth Theatre’s first production - a Jubilee performance of “1066 and All That” directed by the country drama inspector Mrs. Kate Dedeney. They will appear at the Dorking Halls in November and the Yvonne Arnaud Theatre, Guildford, in December.”