This page provides the full text of the fourth and final paper issue of our snailmail edition. This website then took over!

Contents of the January 2007 Edition

Welcome to the fourth issue of BLUNDERBUSS, an occasional newsletter designed to keep members of the FGS 1971 and FC 1976-78 intakes in touch. This issue is a bumper four page special since your Editors felt those of you outside the immediate Farnham-Guildford area would appreciate further information concerning the future of Farnham College (see further details about these developments below). We’ll probably return to the usual two page format next time.

Why I did not get an ‘O’ Level

An Audience with Jeremy Hardy

[We make no apologies for devoting nearly two pages to this section BLUNDERBUSS. The major news for this issue concerns the immediate future of Farnham College. We hope this will be of interest to our further-flung members to whom this news may come as a shock. The content of this section has been augmented by an update given by Ian Sargeant at the recent AGM of the OFA. Ian is a Governor and Trustee of the College and is involved in the discussions referred to below - Eds.]

The Farnham Herald recently reported that Farnham College is in negotiation with Guildford College and a merger of the two institutions is anticipated. The two colleges have been in discussion with the Learning & Skills Council Surrey (LSC) and they have received endorsement from the LSC to continue these discussions to assess the feasibility of merger.

The article in the Farnham Herald suggested a merger would benefit both colleges and reinforce the strengths of Farnham College. Farnham would widen its intake of students wishing to pursue more academic subjects, and benefit from offering a wide range of more vocational subjects (which is the strength of Guildford College).

The Herald did not go into detail about the declining numbers of students electing to study at the College. Due to intense competition at this level, students are choosing to study elsewhere and the College’s traditional catchment areas have been lost to other 6th Form Centres. In fact student numbers at the College have remained static at around 450 students for at least the past 3 years. And this is despite the College’s continuing high academic performance and record. Nevertheless the low student numbers at the College means there is little cash to invest in new facilities and new courses, both of which are required in order to expand its curriculum and attract new students. Ultimately the College is unable to invest in and for its future.

By contrast, Guildford College has a student body in the region of 8,000 students. Its new Principal is keen to expand educational opportunities at the college and has already overseen the takeover of Merrist Wood. This means Guildford already has two campuses at Stoke Park and Merrist Wood.

The situation at Farnham is complicated by the history of the site. Many readers will know that neither the College or the County owns the site, which is managed by the OFA Trustees. This situation arose at the start of the 20th century when the old Grammar School site in West Street was sold and the money was used to buy 10 acres of land which became the site of the new school. This was opened in Morley Road in 1906.

Prior to the closure of the Grammar School in July 1973 some people felt the curious set of circumstances at Farnham might be used to argue the case to retain the Grammar School and thwart the planned Sixth Form College that emerged in September 1973. These plans came to nothing. Known to most of us as the “old  building”,  the  original  part  of  the  “new” school has since been renamed “Morley Court” to distinguish it from other parts of the now extensive College buildings that have grown up since 1978.

The view of the Trustees is primarily to retain the site for educational purposes for students in the Farnham area in order to perpetuate a tradition stretching back over 400 years. The Trustees have had three main objectives in the negotiations with Guildford College: (1) to retain the name “Farnham College”, even if it is also branded as part of Guildford College; (2) to retain a core academic content to the curriculum taught at the College; and (3) to retain the idea of Governor/Trustee within the new institution. The last point is the least likely to be achieved since it is unlikely that Guildford College will allow Governors or Trustees as part of the management of its new campus. Nevertheless the Trustees are hopeful that some form of understanding or arrangement can be agreed over this.

From the above it will be clear that the “merger” will be a takeover by Guildford College. Farnham College will presumably become the “Farnham campus” of the enlarged institution and without its own Principal (since it is assumed the “campus manager” will be answerable to the Principal of Guildford College). Frequent travel between the sites is not anticipated, since each campus will concentrate on its own strengths. This is already true of Merrist Wood which continues to offer its own courses in animal care, arboriculture, floristry and horticulture. Presumably Farnham will become the academic centre of Guildford College, benefiting from its links with a much larger institution which will be able to afford considerable investment in new and updated facilities at Farnham. These are likely to include a new sports hall.

The negotiations have advanced to the stage of consultation with the various groups associated with Farnham College. Assuming the consultation process agrees with the proposed merger, this recommendation will then go forward to the LSC for ratification by the relevant Minister. Assuming this all goes to plan, Sally Francis, Principal of Farnham College, has stated the outcome will be known over the summer, allowing the merger to take place as quickly as this autumn.

What is less clear is whether the merger will lead to any rationalisation of facilities on either or both sites. Given the intention of Guildford College to invest in the facilities at Farnham this seems unlikely, at least for the immediate future. What we do know is the Trustees expect a fair proportion of the intake in the merged site to be from the Farnham area. As long as any agreed proportion is met, the rent for use of the site will be kept at reasonable levels. However if the proportion falls, the Trustees will reserve the right to charge a more commercial rent.

Seeing Red at the College

Last summer, around 80 students and 20 members of staff from the College and the Ridgway Further Education Unit took part in raising money for Sport Relief. Fundraisers paid for the privilege of completing a mile around the College grounds. Participants were asked to wear red and the way the mile was completed was up to them. Some ran, walked or were pushed. One student had the luck of getting a piggyback ride the whole way round! A total of £300 was raised during the day.

We regret to report that plans to publish a topical (and perhaps timely) history of Farnham College have been shelved. Your Editors were asked to advise the College on how the history might be produced and what additional sections would be required to cover the full story of Farnham   College   over   the   past   35  years. Unfortunately the College, whilst accepting the advice, felt it did not have the time to complete the project. This is disappointing news, especially since the OFA had allocated funds to assist with its production.

The 2007 Annual Dinner takes place in the splendid setting of Farnham Castle. Interest is likely to be high and there is a limit of 128 people so early booking is recommended! Booking is now open and about half the tickets have already been sold. Tickets cost £40 (including wine and entertainment) and booking information can be found on the OFA Website www.farnhamians.org/ofa/ or email Roger Edgell rogeratedgell.freeserve.co.uk tel. 01264 332765. Doors open at 6.30pm and the dinner starts at 7.15pm.

Last year’s dinner was attended by 90 old boys and former staff. The toast was given by Commander Ron Short who described his 28 year career in the Royal Navy and his subsequent work with Marconi.

The 2006 Beerex was attended by Chris Stacey, John Saunders, Mike Mehta and John Clarke (photos of last year’s event appeared in issue 3, otherwise contact Farnham Police Station for those kindly taken for us by members of the constabulary). The usual rabble will to turn up to the Saturday lunchtime session, as last year. Book your tickets early to avoid disappointment!

No more news on a proposed reunion as yet but feedback welcome and volunteers to organise, very welcome!

Why I didn't get an O Level 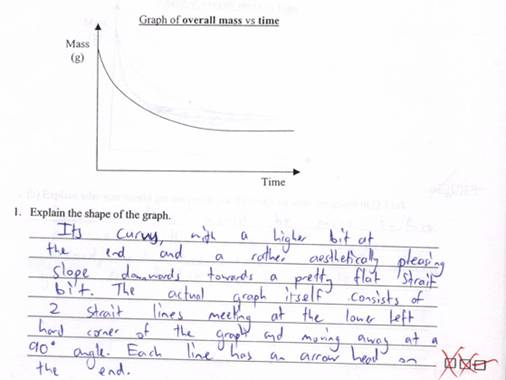 Suggested Answer (an for the visually challenged): “It’s curvy, with a higher bit at the end and another aesthetically pleasing slope downwards towards a pretty flat straight bit. The actual graph itself consists of 2 straight lines meeting at the lower left hand corner of the graph and moving away at a 90 degree angle. Each line has an arrow head on the end.”

In the depths of a dreary December evening, Jeremy entertained a capacity crowd at the Farnham Maltings. It was heartening to see a sprinkling of former school staff including Betty Morris, John McLaughlin and Pete Wicks, enjoying themselves in the foyer beforehand. Ex-pupils of FGGS and FGS were present and the familiar faces of Sally Pike, Jill Goddard, Kathryn Wallis, Caroline Gooding, John Clarke and Mike Mehta could be picked out in the gloom, while the 6th Form College was represented by Judy Day, Kim Larby and chums (and Jeremy’s family by John correctly identifying “Auntie Moo Moo”).

Inexplicably, The Maltings closed its bars early, throwing the elderly into total confusion and resulting in some finding themselves in The Cobbett and others at Katy Sturrock's house, for a well-deserved post-show drink or two. After a few sherries, memories were stretched to the limit to identify the figures in the 1979 panoramic whole-of-college photo, which Katy unearthed from her capacious drawers.

Ah, the smell of the crowd, the roar of the greasepaint and the drooling over old boyfriends/girlfriends... So, until next year my fellow thesps, au revoir.

The grown-ups amongst you will remember this august publication of decades past and past decades. The Farnhamian is still going, hale and hearty, as part of the OFA subscription. Older issues of the magazine (1912-1937) are however freely available via this link.

www.farnhamians.org/ofa/ is packed with information about the Grammar School The Website also includes details of forthcoming events, booking information for the annual dinner, news, and reports of various OFA events.