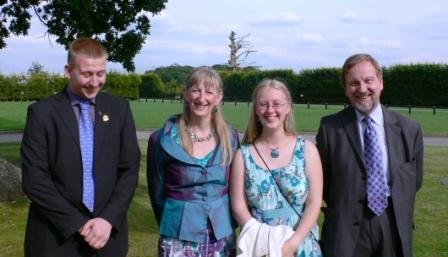 "Having left school with 1 'A' level (German), I joined the Ministry of Defence as a trainee computer operator. They sent me to Brooklands  Tech. where I got an 'A' level and an HNC in Computer Studies, then having got the studying bug I went to Farnborough Tech and got my 'A' level Maths (pure and applied).

That did me for a bit; I was married to Peter, progamming for Fortran for the MoD and flying gliders, singing in choirs and going to the Proms in my spare time.

We had two children and I became childminder for several years until I decided it was time to do something for myself, and I did a full-time degree in Computer Science at the University of Hertfordshire, just down the road from where we live in St Albans. My placement year introduced me to software testing, and I now test SIMS (Schools administration software, not the game!)

I'm still singing in as many St Albans choirs as I can get away with, and I'm a church Elder and webmistress, also taking services and playing the organ occasionally. Peter and I have been married 30 years this year and we are going hillwalking in New England to celebrate. We are still in touch with Helen (Collett as was) and Colin Elwood and their families and meet up from time to time.”