One Man And His Dog 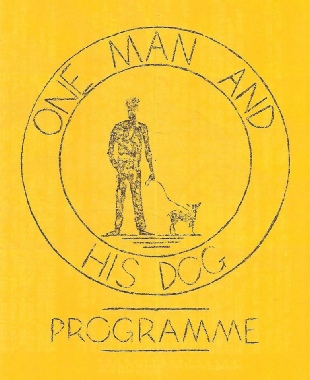 The infamous revue "One Man and His Dog" was performed on the evening of Thursday 5th May 1977 in front of a drunken large audience.

Currently we only have copies of the programme, which is reproduced on this page.

As some of the programme is not very well printed, we also provide a transcript.

Here is the front cover of the programme.

And here is the full programme of skits and sketches (a transcript appears further down this page).

"ONE MAN AND HIS DOG"

Sketches in order of performance.

1. INTRODUCTION - The Revue is introduced by a popular folk hero.

6. CENSORSHIP SKETCH - In which nothing is censored.

7. ART TODAY - An interesting and educational discussion between dogs.

9. PSYCHIATRIST TALK - Which has nothing whatever to do with cleaners

10. FILLERS - Bits and pieces, skits and songs to bore you for a bit.

11. DIRECTORS SKETCH - The moving and horrible story of failure.

12. SONGS - See three stars of rock'n'roll breaking up their guitars.

13. MUSICAL RESTAURANT - The action is about as fast as a steam roller.

14. HAMLET - The full four hour version of this play by Shakespeare.

15. BLACK HUMOUR - Anything could happen in this sketch to end all.

16. COURT SKETCH AND FINALE - The moment of truth for the sketch directors. Look out for a well known football team a short man wearing glasses.

CAST IN ORDER OF APPEARANCE

DROPS BY Harry (The Boss) Bennett

UNDER HIM IS "Penny" (His number one fan)

ALSO ON PROPS (or under them)

The one and only West Ham Utd supporter ... Chris Greentree

Martin Collier and Geoff Whiting (without the aid of alcohol)

TAPES AND ATOMIC GENERATORS OPERATED BY

LIGHTS STOLEN AND OPERATED BY

PIANO BUILT AND PLAYED BY

FRONT OF HOUSE MANAGED BY

Ian Richards ... who was helped by Gill Fox (but that's his affair)

Jane Lucas and Nicola Phair are nothing whatsoever to do with the Revue and have no knowledge as to the whereabouts of Geoff Whiting's trousers. 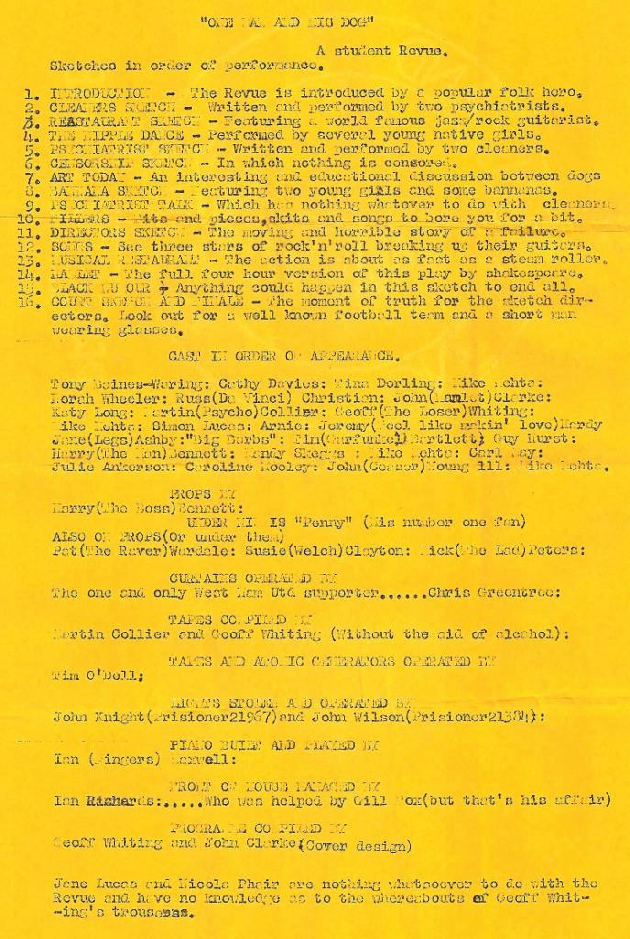